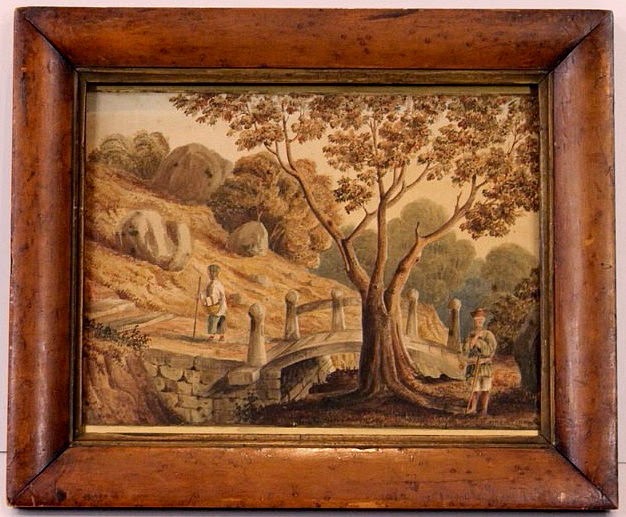 Ahoy from old Amoy!  I received an email today about a rare Amoy (present-day Xiamen) original watercolor of the White Stag Temple (which is still standing) for sale by Marani Fine Art, Australia. With their permission, I repost it below; you may email Mr. Bezuijen  at maranifineart@bigpond.com for further details.  Dr. Bill

Tue, Mar 3, 2015, Robert H. Bezuijen  wrote:
Dear Dr Brown,
When researching an early Amoy watercolour I came across your fascinating amoymagic website and read your family history with much interest.  From a 'nomadic lifestyle' point of view our lives have not been dissimilar, in that I lived and worked with shipping groups in Africa and Asia for thirty years, including ten happy years in Hong Kong during the 70s/80s, and after my last posting for the P&O Group in Vietnam from 1993-96 I decided to change course, hopped off the corporate bandwagon and, having always been interested in and collected art throughout my stay in Asia, I decided to deal fulltime in Asian art, with particular focus on historical and topographical images (paintings/photographs/manuscripts).  In this respect I wondered whether the following could be of interest to you:

I have in my collection a rare, early watercolour of Amoy, titled "Sketch of part of the grounds of the White Stag, a large Joss House in Amoy". Please see images and detailed description attached.

It is signed indistinctly on verso in a western hand and dated December 1844, barely two years after the signing of the Treaty of Nanking in August 1842, and only a year after Amoy was officially opened to foreign trade in November 1843.  From my research {as attached}, this is one of the earliest known images of the topography of Amoy, over 170 years ago, also pre-dating any photograph of the area, the earliest of which dates to 1849.

Regarding the artist, I have not been able to decipher/identify the signature, though not for the lack of trying. Eg. the London Missionary Society established its Amoy Mission in July 1844, and its first missionaries were Rev.J.Stronach and William Young. The American Episcopal Church established a mission in Amoy in 1842, and its missionaries in 1844 were Rev.J.C.Hepburn and J.Lloyd. None of the other names match the signature either, such as Jardine's Agent in Amoy in 1844 was a Captain Forbes, and the first British Consul was Captain Henry Gribble.  Also, in July 1844 a severe fever broke out at Gulangyu Islet, from which few of the foreign residents escaped. So the artist might have been a visiting trader/ships crew or other company representative.

I look forward to hearing from you whether this is of interest.  The price is A$1250 (approx. US$975/CNY6100). Packing/postage to be advised separately, also depending on whether sent framed or unframed, and whether to China or the US.


Artist Unknown, c.1844
Chinese figures by a bridge and banyan tree within a hilly and rocky landscape,
the following pen inscription on verso:’
‘Sketch of part of the grounds of the White Stag
a large Joss House in Amoy
indistinctly signed and dated December 1844,
with further inscription A piece of rock is shaped somewhat
like a (white) stag …. ….’
Watercolour (in sepia tone) on paper
24.3 x 33.9 cm (9.6 x 13.4 in) – image size
35.8 x 43.1 cm (14.1 x 17.0 in) – frame size
Framed under glass in contemporary maple frame

Amoy
The coastal city of Amoy (Xiamen) in Fujian Province, southern China, was the focus of trade with the West for many years. The Portuguese, Spanish and Dutch traded here intermittently in the 16th and 17th centuries, and the East India Company established a base here in 1676.

The strategic significance of Amoy also led to its involvement in several wars and campaigns. During the First Opium War [1839-42] between Britain and China the British captured the city in the Battle of Amoy on 26 August 1841.   Amoy became one of the  five treaty ports opened by the Treaty of Nanking signed between British and Chinese officials on 29 August 1842 following China’s loss in the First Opium War.  The treaty was ratified by Queen Victoria and the Daoguang Emperor nine months later, in May 1843, and in November 1843 Amoy was officially opened to foreign trade.

European settlements were concentrated on the islet of Gulangyu off the main island of Amoy, and between 1842 and 1845 merchants, officials, consuls and missionaries from some thirteen countries established trading houses, consulates, churches and hospitals. A provisional British Consul by the name of H.Gribble was appointed in November 1843, replaced in November 1844 by Sir Rutherford Alcock as the first official British Consul.  Amoy especially became an early entry point for Protestant missions in China.

White Stag Hill – White Stag Temple {Joss-House}
Several early travel accounts of Amoy mention the distinctive rocky landscape and features of White Stag Hill.  For example, George Smith in his ‘Narrative of an Exploratory Visit etc’ [1847, refer Bibliography] made the following observation:
‘Among the temples there are some remarkable buildings. The collection of temples situated on the hill commonly called the “White Stag Hill”deserves particular mention. They consist of a cluster of buildings perched on overhanging rocks, and present, from the summit, a most romantic view of the city and its busy population, at the distance of a mile’.

And Henry Charles Sirr in his ‘China and the Chinese’ [1849, refer Bibliography] records:
‘The heathen temples or joss-houses at Amoy are curious and handsome structures, more especially about a mile from the city, upon White Stag Hill; several of these heathen places of worship are built on a most picturesque spot, at the summit of rocks, and appear to be overhanging the city; groves of banyan trees surround the temples, under whose luxuriant umbrageous foliage the priests idle away the greater part of the day’.

John Scarth in his ‘Twelve years in China’ [1860, refer Bibliography] also mentions, among others:
‘After a hurried sketch of part of the Mam-poo-to temple, we mount again and steer for
the Telegraph Hill and the White Stag temple, in search of views’.  And further:
The temple of the White Stag (the name is derived from a small stone figure of such an
animal in a cave hard by) is approached by a high flight of stone steps. From the temple  there is a fine view of Amoy. A banyan-tree shades the White Stag temple. It is a wonder
how it grows in such a rugged spot.’
On page 15 of his book there is an illustration titled ‘Amoy, from White Stag Temple, Fukien’.

The ‘China Review’ (19thc.,n.d.) also describes the topography of Amoy as illustrated in this early watercolour: ‘The island of Amoy is physically remarkable for the huge granite boulders which lie scattered about: boulders of massive proportions, poised in the most fantastic manner. In the valley beneath the White Stag Grotto is the Hong-tong-chioh (Wind-moved Rock), a block of stone upwards of 40 feet in length, and not much less in girth, commonly known as the Rocking Stones’.

And further: ‘Amoy teems with proofs of the widespread influence of Buddhism. Nestled amongst the rocks, and situated in those picturesque positions which the votaries of this faith seem to select with an inborn instinct, are numerous Buddhist temples and shrines, erected in honor of various popular deities. The sites upon which many of these temples stand have been sacred resorts as far back as the Ming Dynasty, AD 1368-1644.
The proximity of so popular a temple as the last named [Ho Khe Giam or Tiger Stream Temple] is one cause of the usually deserted appearance of the Pek-lok-tong (White Stag Grotto), and except on certain festival days the services of one resident shaven monk are more than enough to perform the various duties attaching to the guardianship of the temple, and the offices of the priesthood’.

Comments
G.H.R.Tillotson observes in his ‘Fan Kwae Pictures’[refer Bibliography] “..like the more usual views of Shanghai, views of the treaty port of Amoy suffer from standardization, though they are much scarcer because Amoy was taken by the Tai Ping rebels in 1853.
In fact only three paintings of Amoy of the 1840s have sofar been published, namely:
. The Parade Ground in Xiamen, c.1844, Collection HSBC, Hong Kong
. Amoy: The Parade Ground, c.1845, Collection Sze Yuan Tang, Hong Kong
. Trading Junk at Xiamen, c.1840s, Collection HKMA, Hong Kong

This watercolour, dated December 1844, is therefore one of the earliest known images of Amoy following the conclusion of the Treaty of Nanking in August 1842.  It also pre-dates any photograph of Amoy, the earliest of which dates to 1849, attributed to a Chinese photographer Lin Zhen {see Bennett, Terry, History of Photography in China 1842-1860, London, 2009, p.201}.

Auguste Borget (1808-77), before visiting Canton and Macau, joined the French frigate Psyche for a voyage along the Kwangtung and Fukien coast, travelling up to Amoy. And in a letter written on board the Psyche on August 9, 1838 he said: “I am then at last in China. I have taken possesion of the Celestial Empire!” .
Whilst this drawing is not by Borget, it is nevertheless interesting to note a similarity in the treatment of the tree, when comparing it to Borget’s pencil sketches of eg. ‘Burial Scene, China’, ‘Village Scene, China’, and ‘Old temple near the Macau border’, as illustrated in Hutcheon’s ‘Souvenirs of Auguste Borget’ [refer Bibliography].